The uncanny relationship between the very similar, yet very separate, lives of two of South Africa’s foremost artists, Gladys Mgudlandlu and Maggie Laubser, is explored in a special Strauss & Co exhibition being mounted virtually during the 2020 RMB Turbine Art Fair in Johannesburg. The show focuses on the visionary nature of their work, and the lives they led in parallel to each other, in the segregated South African society of the time.

Both Mgudlandlu and Laubser grew up in rural settings, in the Eastern and Western Cape respectively, and both received a very religious upbringing. Mgudlandlu, from missionary stock, was a member of the African Methodist Episcopal Church, and Laubser, departing from her family’s Calvinist background, embraced Christian Science quite early in her life. Both artists’ families and wider communities derided their artistic inclinations and the early works and exhibitions of both were heavily criticized. Mgudlandu’s works were considered too innocent, naïve, and even escapist; Laubser’s were deemed too modern, initially, and later, not modern enough! However, the work of neither of these artists fits within a modernist paradigm, not even a South African one.

Both artists were fond of portrait painting, with Mgudlandlu portraying rural Xhosa women, and Laubser, the urban bohemia of Berlin early in her career, and later the rural working class. They both looked closely at labour in South Africa, with Mgudlandlu introducing a gender dimension to cattle herding, and Laubser depicting various aspects of harvesting, in particular. Most noticeable in their choice of subject matter though, is their use of birds as recurring central motifs: Mgudlandlu focusing most often on flocks of birds in the landscape, and Laubser favouring water birds and cranes. Their painting styles were virtually synchronised, with each developing from strong, expressionist renderings to highly abstract works.

The two artists shared a visionary, spiritual quality in their work. Laubser never painted any shadows, everything was always bathed in bright sunlight. She even named her house in the Strand, Western Cape, Altyd Lig (Forever Light), exemplifying her belief in the eternal power of spiritual upliftment. Mgudlandlu on the other hand frequently painted shadows, essentially referencing and acknowledging the spirits of the ancestors. Her nickname Nomfanekiso, means the ‘shadow’, or the ‘picture of a human being’, because she was so small when she was born. She later jokingly said it was quite an apt nickname because she turned out to be a painter of pictures!

The phenomenal legacy of these two artists is indisputable: Laubser’s work has been the subject of many academic studies and boasts the only comprehensive catalogue raisonné that has been published on the work of a South African artist. Mgudlandlu’s work is especially important as she was the pioneer black female artist in the mainstream art world, and she serves as continuous creative inspiration for others: from contemporary artist Kemang wa Lehulere’s performative chalk drawings (part of his Standard Bank Young Artist’s Award show in 2015) after he restored the murals in Mgudlandlu’s modest house in Gugulethu, outside Cape Town, to the creative restaging of a Mgudlandlu exhibition by curator Nontobeko Ntombela at the Johannesburg Art Gallery in 2012.

The two artists seem never to have met in person, but their paths crossed metaphorically – it is well-known that Mgudlandlu always made a special point of visiting ever Laubser exhibition mounted in the Cape.

The RMB Turbine Art Fair exhibition, Parallel Visions, consists of a virtual gallery that showcases the works of these two phenomenal artists in parallel, accompanied by a catalogue in both electronic and print form. During the run of the Fair, there will be formal lectures on the artists and their work, as well as virtual walkabouts and a special zoom workshop for art teachers and members of the public.

A word from the curator, Wilhelm van Rensburg 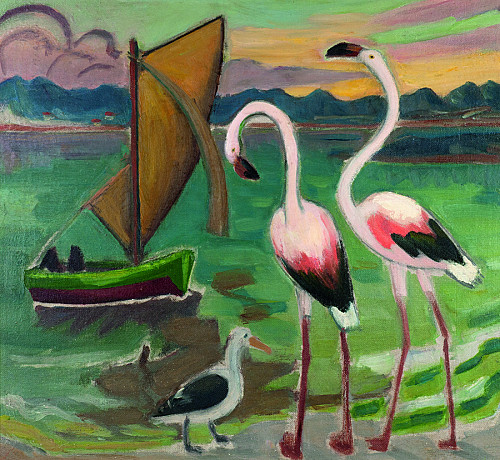 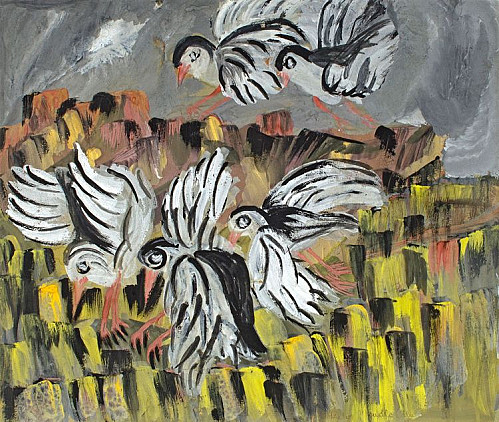